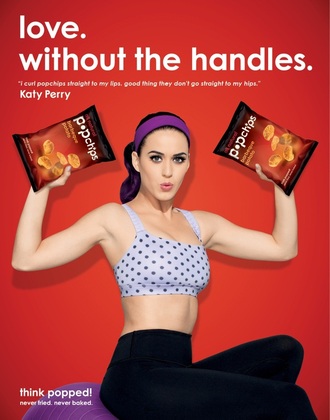 The potato chips propaganda poster is a good example of testimonial. The popchips company used the famous singer Katy Perry as the person to be on the popchips advertisement poster since 2012.  Katy Perry also had a chance to make her own flavored popchips. The small letters under the big title on the poster shows a quote from Katy Perry, saying “I curl popchips straight to my lips, good thing they don’t go straight to my hips.” This quote can show how popchips might be targeting people who are obsessed with their weight and appearance because the quote includes “they don’t go straight to my hips” which suggests that your hips won’t look fat. The quote from Katy Perry and the picture of her showing her belly and hip can give an idea to the audience how even though people eat the popchips, people would not get fat. The title of the poster, “love. without the handles” and the pose of Katy Perry can show people’s muscles will stay the same even though they eat popchips. Katy Perry’s pose looks like she is exercising with popchips and the second sentence of the title, “without the handles” can directly show the viewers that popchips does not make people obese.